So... here is is, a massive scale update on at least some fronts.

First off, it has been just over a month since my bunionectomy. Ever wonder what a bunion is and how in the heck they get rid of it? Yeah, probably not so much.

This is a simulation of the procedure they performed on me...


How was it? It sucked. Actually, at first it was fine, thanks to the wonders of modern pharmacology. Then the numbness subsided, and it was hell.

Suffice to say I have a new respect for pain, and for painkillers. A month on, I am a few pounds lighter and still a little bit limpy, but I can attest to the straightness of my toe, and the smoothness of my foot. Tragically, my foot is still a disgusting mess- horribly swollen, a bit discolored, and peeling everywhere (I guess this is what happens to surgical sites).

On the bright side, I'm healing much faster than many, and am expected to be back in running condition in 2 more months.

And everything else? Well, there is a lot going on. Michelle and I have toned things down, and are no longer living together. At first, it looked like the end of the relationship, but we have decided to continue, but not live together. We are, for lack of a more robust description, dating.

What that really means is that our time together is quality time, and we are re-asserting our separate lives a bit, and getting along famously.

I'm back to work here, and am out at the "farm" every morning, prepping the site for the electrician so that there can be functional electricity out there.

As the blistering Texas heat encroaches, work has to happen early in the morning, and the prospect of doing construction is daunting.

More soon. Just wanted to update y'all.
Posted by Francy-Pants at 8:00 PM 1 comment:

So, your humble scribe and cohorts (my brother Paul, and partner Michelle) returned early this week from a sweet little trip to Milwaukee to visit a glorious place known as Growing Power. This place is incredible, and wonderfully inspiring. 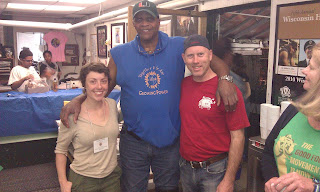 This is me with Will Allen, the founder, and Mark, my friend Suzi's husband who happened to be there all the way from Richmond, Virginia (they are farmers, too!). Will is a giant. A giant with a mission: to change the food system in America, which he believes is broken.
We learned so many things over the weekend: How to build greenhouses (Paul is a whiz), how to beekeep (Michelle can't wait), how to grow culinary mushrooms (this will be one of the first things we do!), how to use PV panels for solar energy, how to build aquaponic systems (where fish poop feeds your plants, all organic plus you get to harvest fresh fish!), and how to grow in a greenhouse year round.
Now, we just need to get on our land and do it.
There is so much to do, so much to learn, and everything costs so much. We've figured out that we must build a fence before we build our yurt home. Then comes all the rest of it. We are very behind our original (completely unrealistic) schedule. But then, that is really no surprise. What we are trying to do is hugely involved and will take a lot of time to mature.
We are up to our ears in work, which is wonderful, and Austin has now received more rain than we got all year in 2011. So, fingers crossed, mouth smiling, we sally forth...
Posted by Francy-Pants at 3:58 PM 1 comment:

Dear two remaining readers (who are undoubtedly blood relations), here I am again, putting off design work so that I can type out a cryptic little something or other on the ethers here...
Life has lavished me with all sorts of new and exciting things this year, no small thanks to my incredibly wise, generous family who have filled in the gap where traditional financing failed to meet my needs.
I've thought a lot about this- about the failure of the banking system to accommodate people like myself. People who work hard and eek out a reasonably decent living. After maintaining not one, but TWO corporate jobs for over a year, imagine my shock and disbelief at being denied a loan. A loan for less than my annual income, at that. All because I do not work "full time."
I wonder how many others out there, self-employed people, business owners and the like, who are also unable to receive the boost they would like to encourage the expansion of their businesses. Meanwhile, the government throws billions to alternative energy startups, who richly reward their top brass before declaring bankruptcy. Entire police forces of cities underreport crimes in order to manipulate the stats, so that some Chief can get an award, patted on the back by some mayor, while the victims of crimes suffer.
Our political system, like our banking system, does seem woefully misguided. Our policies make little sense to the working class who are, like it or not-- the backbone of this once-great nation.
I listened to a news report last night talking about the Forbes list of the world's wealthiest. It has grown and changed very little this past year- because the world's economy has been largely stagnant. This begs many questions for me, not the least of which pokes holes in the underlying premise of capitalism- that growth is the end goal, growth at any expense, growth for the sake of growth.
As a keen observer of landscapes, I notice the proliferation of plastic garbage in every corner of the city. The other day outside of town I delighted, from a distance, believing I was witnessing a field full of cowbirds. As I approached, I discovered that it was a verdant field punctuated by white plastic bags hung up on straggling plants. I was instantly saddened.
Why the digression? Because I am looking at a world increasingly clotted with plastic crap. Food coming in more elaborate, disposable containers; toys and tools in complex anti-theft packaging; and the toys and tools themselves- increasingly cheap, swaddled in plastic, plastic-bodied, obsolescent by design.
I think there is a peak to this bell curve of consumption. It cannot go on forever. We are being choked out, like lawns overtaken by weeds- by this cavalcade of "cheap shit." And I believe, against belief, that there is an end in sight.
That is why I am starting a farm. My deepest desire is to do good, to lead a simpler life than the one that has been shoved down our throats by society, and to be productive in a way that is tangible, real, and satisfying. We've been phasing out plastic from our lives, and in the same way I am attempting to phase out some of the superfluous static.
Instead of Facebook in the morning, I am reading a chapter of a book. Instead of watching some mindless entertainment online, I am trying to tend to plants, to educate myself on something, or to work on designs for the farm to come.
It is resulting in an increased mindfulness, a slightly sharpened awareness of my surroundings. A quieter mind that is better able to listen to the keening of my heart, to feel the invisible strings attaching me to my world, to anticipate the needs of others.
There is rain in the forecast, again, and the air is heavy with its anticipation. We are being blessed with an incredible, fertile spring. And I am being blessed with as much work as I can handle. So, over and out. Talk is cheap, it's time to work!
Posted by Francy-Pants at 8:50 AM 1 comment:

The new year crept up on me this time around, somehow more cunning and evasive than usual.
I have my suspicions that this has something to do with getting older, with the general acceleration of time. I expect by the time I am 90 that the world around me will look like a big, muffled blur of activity. It seems silly to expect anything else.
I'm filled with only one major goal for this year: I want to reach the end of it and feel bittersweet about passing the torch to 2013... You see, I am sick and tired of reaching the end of the year and feeling contempt for it. You know, the grandiose vitriol of "Hey 2011, don't let the door hit your ass on the way out!" and what have you.
Instead, I want to feel wistful about the passage of a wonderful year, about having to hand it over in exchange for a fresh, new one.
In fact, maybe it's the sweet afterglow of the holidays (goddamn, I have just about the best family ever!), or perhaps it is the recognition of my wonderful friends (seriously, just about the most wonderful people you could ever hope to know), or it could just be that I am about to purchase a piece of land and attempt to make my dreams come true, but I have been feeling all sappy and grateful about life an awful lot lately.
In fact, despite the fact that we are almost 2 weeks into the New Year, I would like to express my gratitude for the good fortune I have had this past year, and then some:
Shockingly- it's taken me almost 2 weeks to complete this, despite the fact that it is no work of art. I promise a more esoteric, thought provoking post in the near future.
Posted by Francy-Pants at 1:49 PM 1 comment: