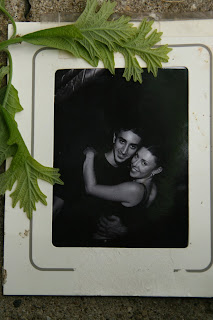 For 2 and a half tumultuous years, I shared my bed, my heart, my secrets, and my self with this man.
We lived together roughly half that time, and sometimes it was wonderful.

Steve was a gifted artist. He was tall, dark, and handsome, and had a wicked sense of humor.
He was also coy, contrary, and prone to long, dark depressions.

My initial attraction to him was visceral, magnetic, and impossible.
When I saw him, my hands would shake, and I would be tongue tied and nervous.
He was way too good-looking to possibly be interested in me, I thought.
But I was wrong.

We were caught up, smitten, and things were sweet for a time.
And then the cycle began. We loved each other and we hurt each other.
I never really took his depression all that seriously, believing he was just being petulant and dramatic.
"Morosekopf" was his nickname, playfully bandied about.

After he followed me to Indiana, things really fell apart.
The relationship became increasingly abusive.
I threw him out.

The last time I spoke to him, I was standing upstairs in what had once been our bedroom, on the phone.
Screaming at him.

That was about 4 and a half years ago.

So much anger, hurt, hate, and shame has followed in the wake of all that.
Moving back to Austin, I was terrified that I would run into him.
I refused to slander him publicly, but my dislike was powerful and no secret.

At 4am, driving to Indiana to clear out the house, I thought about him kindly, for the first time in years.
I imagined calling him, telling him I forgave him, that it was both our faults.
I remembered the good times, and laughing together.
I was surprised by all of these things.

Sometime, in the darkness of that morning he took his own life.

I think my imagined conversation was real.
I have lit candles, and spoken to the walls, I have laughed and wept and remembered.

I wish him a safe journey, and love, and peace.

Steve, I never hated you. It was love, peering at it's reflection in an angry mirror.

I am not angry anymore. And you are free.
Posted by Francy-Pants at 10:10 AM

My condolences, and may you keep the peace you seem to have found.

I don't know you but I found your post when searching for info/answers about Steve. I just found out on Saturday... I am an old girlfriend of Steve's and I just moved back to Austin after living in DC for the past 8 years. I saw him about a year ago when I came back on a visit to look at places to live. He was so happy, so excited about his apprenticeship - I had never seen him happier, like truly happy.

I'm no longer in touch with anyone that used to know him except for his old friend Dave that works at Quacks (the one who told me). So I've been aching to talk with others that knew him. I could relate so much to what you said in your beautiful post: the beauty, the gentle love, the drama, the depression, the frustration, the insane attraction. I just wanted to say that you said it all so very well. I don't know what else to say except that I just know. I'm sorry for both of us that we didn't get to see him one last time. For the first time in years, I finally had his (permanent) number in my cell and I told him I'd call him when I got back to Austin. I got pregnant the day I moved back and life took-off pretty fast, but I thought about calling him all the time. I am fast learning the lesson that you should call people when you think of them or you may not have another chance.

I have few details about what happened. I'm wondering if you wouldn't mind emailing me if you know more and if you're willing to share with me. I spend my late-night breast-feeding sessions on the net searching for answers. I know they're not out there, but it's like I just haven't accepted it all yet... And I know I'm really late to the game, so I'm sorry if you're just trying to move on and then here I am.

I'm sorry for your loss and I thank you for your post.
Cristina
fahrenthold@gmail.com